The Awty School was founded by Kathleen "Kay" Awty in 1956 as a pre-school. The incorporation of an Upper School in 1975 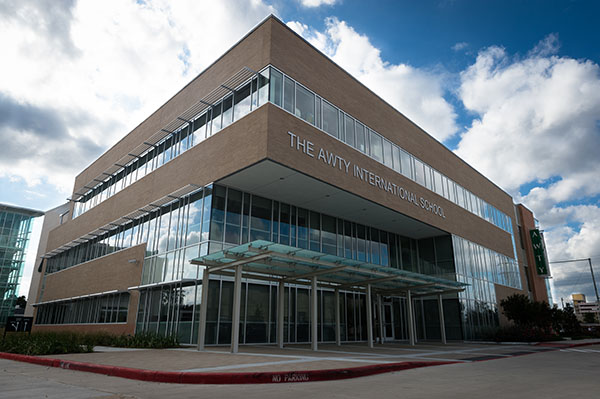 Enrollment has increased from 750 to more than 1,700 over the last 20 years. Today, the school is located on a 15-acre campus in central Houston. Premises include 120 classrooms, science laboratories, art rooms, computer laboratories, libraries, a cafeteria, two covered basketball/volleyball courts, a state-of-the-art athletics center, two soccer fields, and two gymnasiums. The main campus has seen several renovations through the years.  Awty's original preschool facility was completed in 1990, a secondary school science building in 1991, additional preschool classrooms in 1995, and a secondary school building including a computer center, foreign language laboratories and a new library in 1996. Construction was then completed on the Performing Arts and Athletic Center (PAAC). A classroom wing opened in Fall 1999 and the Lower School building opened in 2003. The school opened Awty Field, a state-of-the-art athletics stadium, in 2008. The facility includes a 1,400-seat stadium, press box, soccer field, eight-lane track and field event facilities, four tennis courts, concession stand, locker rooms, maintenance facility, storage facility, and parking.

In April 2014, the school opened the Lower School expansion. This addition added almost 15,000 square feet to the existing Lower School Building. It consists of nine classrooms, a large media facility, a computer lab, a drama classroom, an art room filled with natural light, a teacher workroom, and a medical clinic. Adjacent to the Lower School addition is a large playground that features shade structures, playground equipment, seating areas, and rubber fall surfaces.

In June 2021, the school began construction of a new Campus Center, located at the heart of the main campus. These new facilities will support our students, their teachers, and the ever-changing educational and professional environments they will enter. It has been designed and refined to create a space allowing students to build community, develop 21st century skills, and engage deeply in science, technology, engineering, arts, and math (STEAM). Construction will occur in two phases. In Phase I, the science wing, computer wing, and Secondary library will be removed. Those buildings will be replaced by a new three-story building providing state-of-the-art learning facilities, including a future-oriented library, science labs, and collaborative classrooms, along with new dining halls and an auditorium. Through thoughtful design, we also will be increasing the available green space on campus. In Phase II, to be built shortly thereafter, the two-story building, Fine Arts Recital Hall, staff cafeteria, and cottage will come down to make way for a makerspace and tech classrooms, as well as additional classrooms and collaborative workspaces.

The academic program of the school prepares students for the French Baccalauréat or the International Baccalaureate, and offers an American diploma. All students take a second language. Courses are available in a wide range of levels in the core languages of the school: Arabic, Chinese, English, French and Spanish. To reflect the International diversity of Awty, a range of other languages including Dutch, German, Italian, Japanese, Persian (Farsi), Portuguese, Norwegian and Russian but not limited to these are available under specific conditions determined by the school. Extra-curricular activities include inter-scholastic soccer, basketball, volleyball, track, golf, swimming, and tennis; yearbook, science and computer clubs, and Model United Nations to name a few. Field trips include an annual camping expedition. An after-school program includes supervised study and activities.

All faculty members hold degrees in their teaching fields and most hold advanced degrees. Most language teachers are native speakers of the languages.

The nationalities of the student body are composed of 40% American and 30% French with the remaining 30% representing over 50 other nationalities. Graduates attend universities in the U.S., Canada, Latin America, the Middle East, Asia, and Europe.