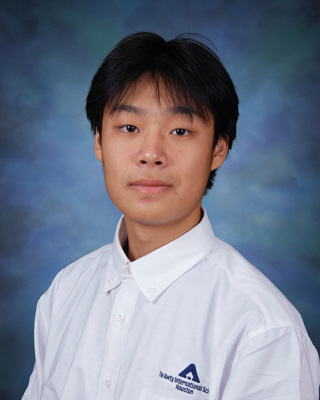 Congratulations to junior Jaden Wu, who was recently accepted to the Research Mentorship Program at UC Santa Barbara for summer 2020.

This competitive, six-week summer program engages qualified, high-achieving high school students from all over the world in interdisciplinary, hands-on, university-level research. During the program, Jaden will be paired with a mentor, will learn about research techniques, gain insight into professional research-based opportunities, and advance his academic goals.

Over Winter Break, three Awty students participated in the 2020 Distributive Education Clubs of America (DECA) State Competition in Dallas. Seniors Sara Bhalla and Angela Chen were state finalists, and senior Rayaan Vellani qualified for the DECA International Competition in Business Management. The international competition is set to take place on April 29 - May 2 in Nashville, Tennessee. Congratulations to all!

DECA is a non-profit student organization that prepares emerging leaders and entrepreneurs for careers in marketing, finance, hospitality, and management in high schools and colleges around the globe. 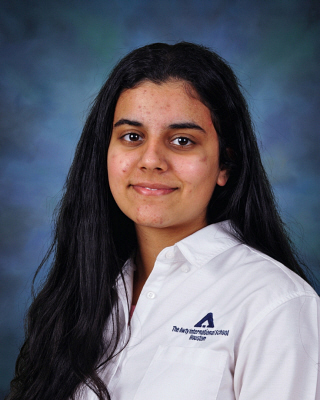 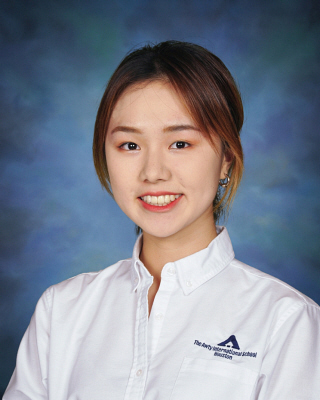 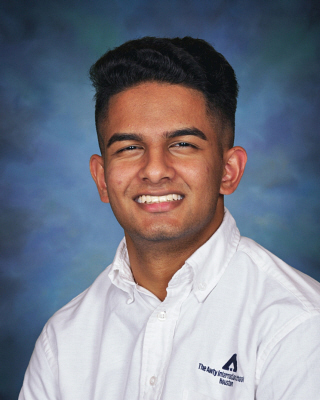 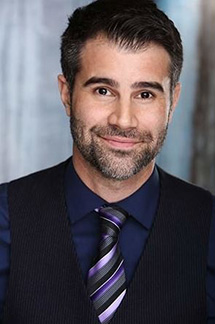 As Stages Repertory Theatre, a local favorite, announces their lineup for the 2020-2021 season, The Awty International School is proud and honored to see one of the upcoming plays is the brilliant creation of an alumnus. Bernardo Cubria, Class of 2000, will showcase The Giant Void in My Soul: A Play for Fools, his first-ever Stages production, on February 12-28, 2021.

"I love the town I grew up in and I love this theatre," stated Cubria. "The Houston Theatre scene is blowing up and I’m honored to be a part of it again."

Nominated for the LA Times Ovation award for best new play, The Giant Void in My Soul, features two fools who confront the momentous questions of life after they discover an enormous void haunting their every action. A comic, poetic, and strange quest leads them back to one question: “Can anything fill this damn void?”

"This is a dream come true;" added Cubria, "the 18-year-old theatre kid in me is so happy." 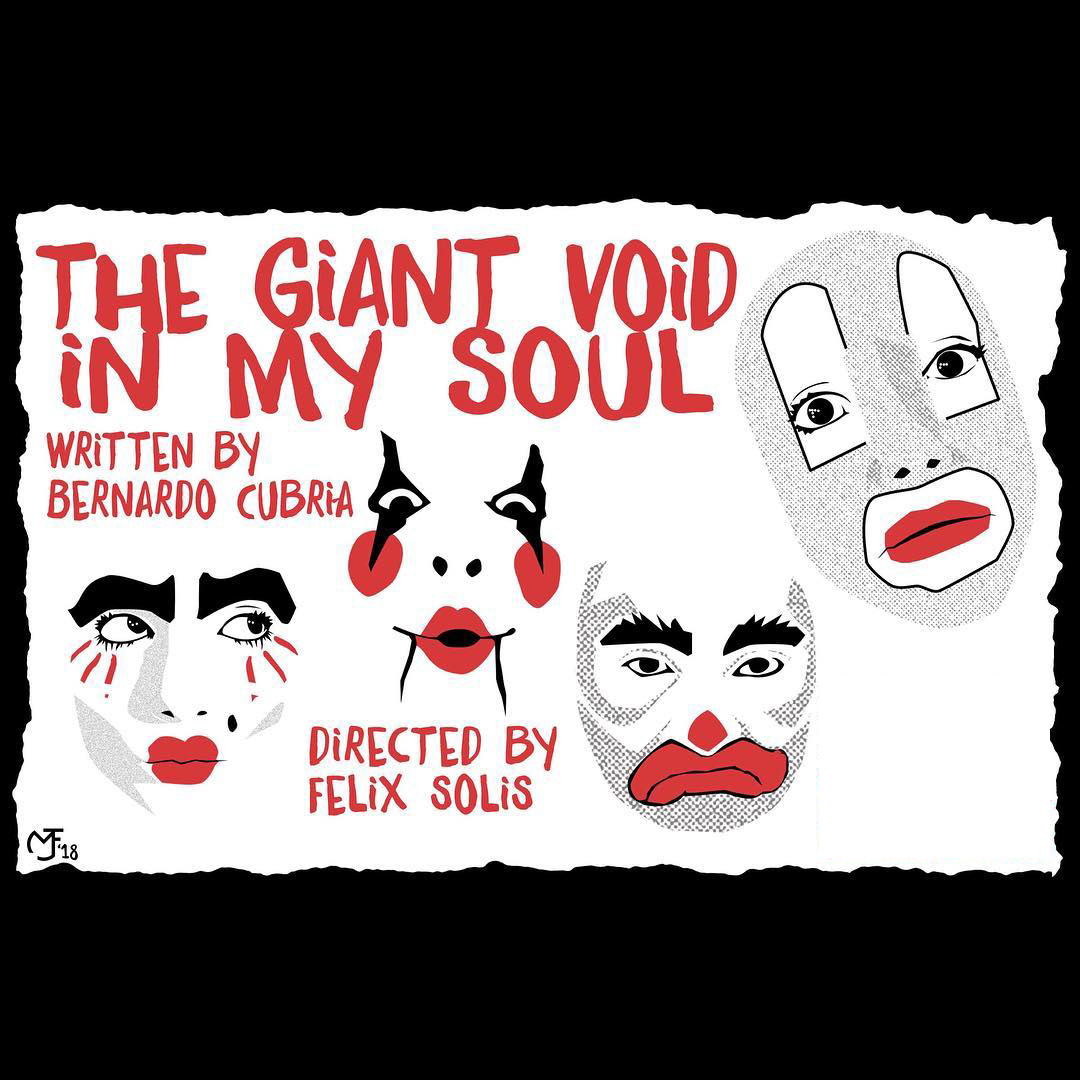 WE ARE THE CHAMPIONS 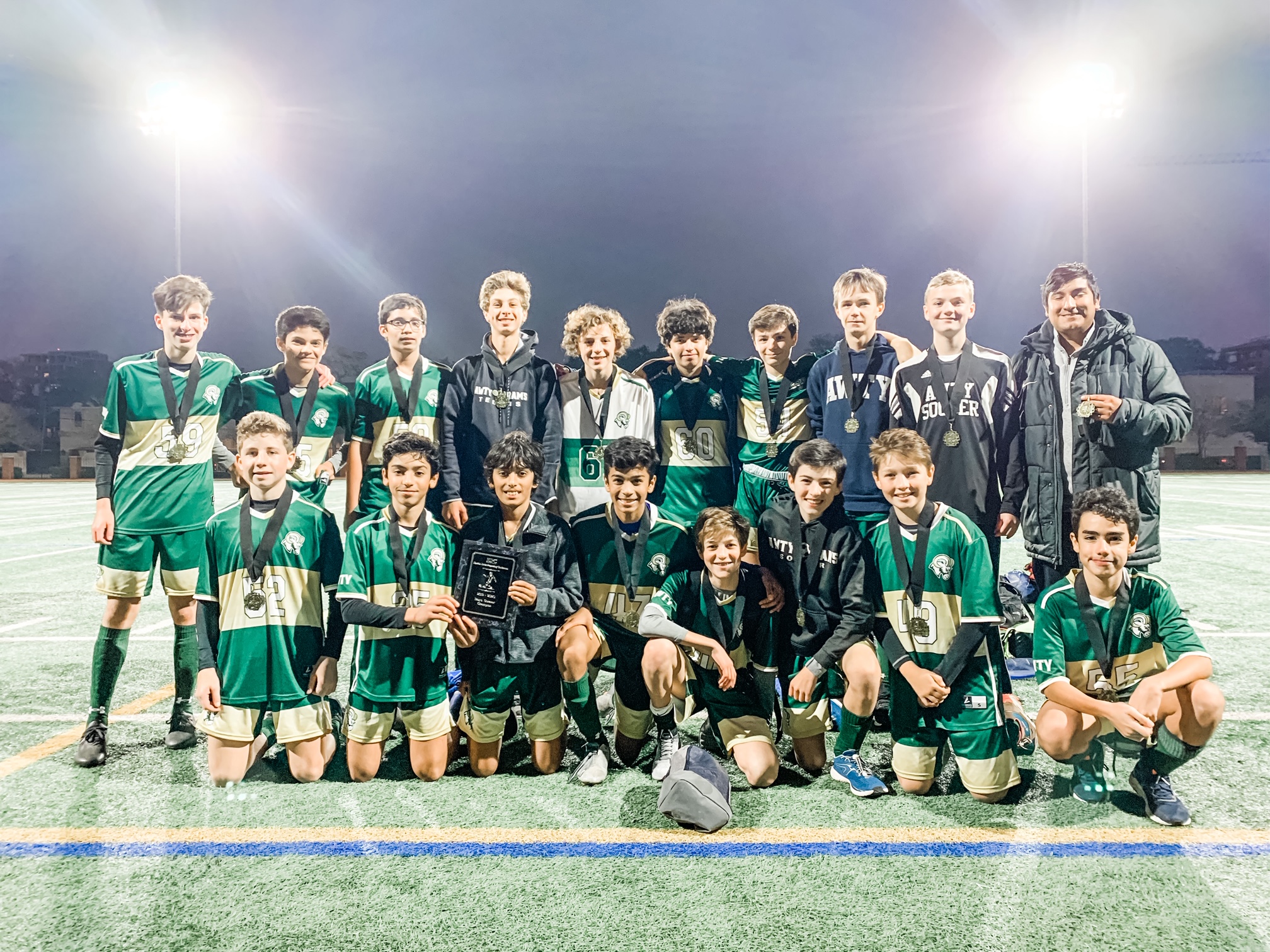 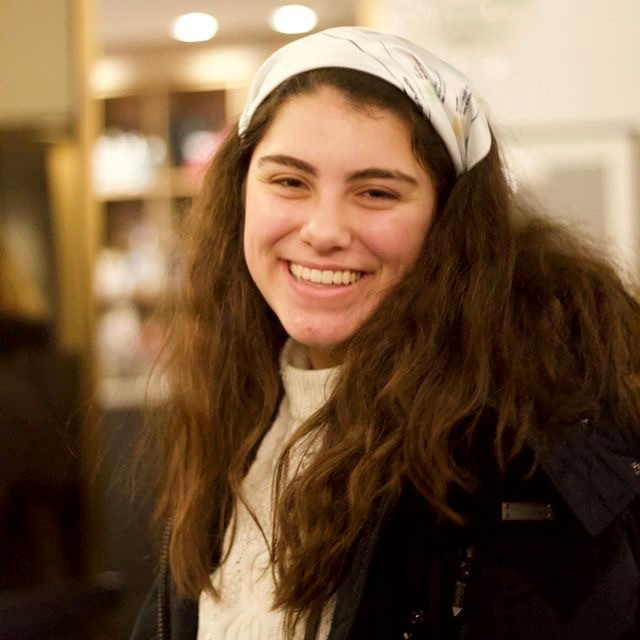 Emily Zoorob, a senior at Awty and a member of the Awty Singers, performed with the Texas All-State Choir in San Antonio on Saturday, February 15, at the Henry B. Gonzalez Convention Center as part of the 2020 Texas Music Educators Association (TMEA) Clinic/Convention.

She was chosen for this prestigious honor through a competitive process held this year across the state at the District, Region, and Area levels. This is Emily’s fourth time to perform as a member of a TMEA All-State organization, a rare accomplishment. Emily sings at school under the direction of Robert Dee, who is a member of the Texas Music Educators Association, a 19,000+ member organization headquartered in Austin.

High school students selected to perform in the All-State concert have competed through auditions to qualify at the state level. All-State is the highest honor a Texas music student can receive. With more than 72,900 students from around the state vying for this honor to perform in one of 15 ensembles (bands, orchestras, and choirs), only 1,780 students are selected.

This competitive process begins throughout the state in auditions hosted by 33 TMEA Regions. Individual musicians perform selected music for a panel of judges who rank each instrument or voice part. From this ranking, a select group of musicians advances from their Region to compete against musicians from other areas in eight TMEA Area competitions. The highest-ranking musicians judged at the TMEA Area competitions qualify to perform in a TMEA All-State music group. Only the top 2.4% of musicians who initially audition become All-State musicians. These All-State students participate in three days of rehearsals directed by nationally-recognized conductors during the TMEA Clinic/Convention. Their performance for thousands of attendees bring this extraordinary event to a close.

SWIMMING LAPS AROUND THE COMPETITION 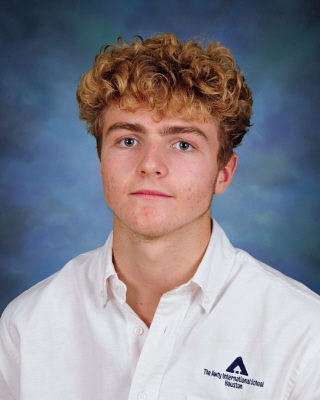 Bravo to senior Will Ward, who broke two swimming records this year:

Click here for other notable performances and the full results. 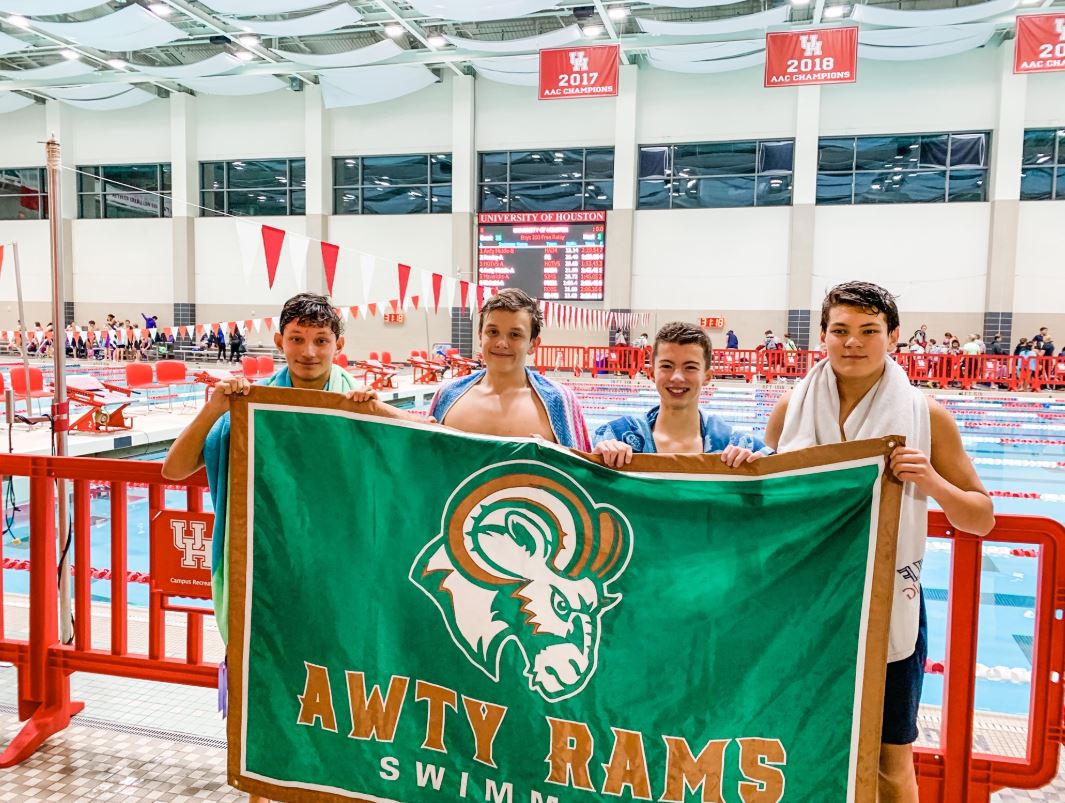 Awty's China Club, Chinese Honor Society, and other members of the Awty community got the opportunity to participate at HTX Market's Lunar New Year festival on January 25 in downtown Houston! 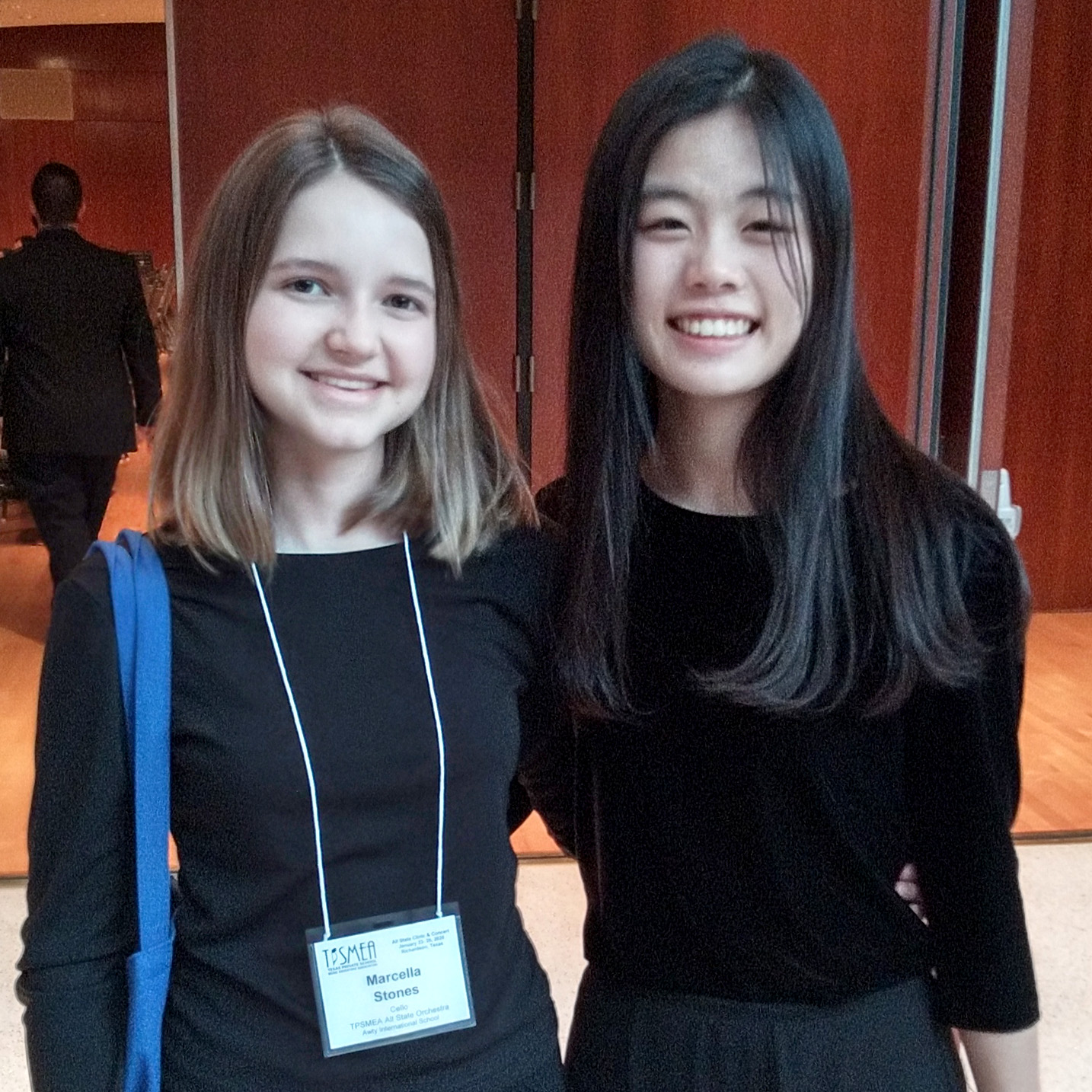 Congratulations to juniors Emily Yao and Marcella Stones! They were both selected to participate in the TPSMEA All-State Orchestra in Dallas, which took place at the end of January.

A big Bravo to Emily for earning the first chair of the 1st violinists. This honor came with the title of Concert Master, making her the student leader of the orchestra. She even received her own introduction during the concert.

Under the direction of Lori Wagner, Awty's Lower School Choir once again had the honor of singing the U.S. National Anthem at the Houston Rockets game on January 11 against the Minnesota Timberwolves. Bravo!

Congratulations to these un-bee-lievable spellers who won the MS Spelling Bee! Mark Lowe (6th grade) is the new Awty Spelling Champion and he will represent the school in the upcoming Regional Bee. Lourdes Reynolds (6ème) was named the Runner Up.

Mark spelled “fungi” and then “unquenchable” for the victory!

So, you think you can dance?

Click on the video below to get a behind-the-scenes look at one of the rehearsals featuring Victoria Van den Bergh who played the roles of a Bumblebee and a Samurai rat.

Congratulations to Awty alumna Belen Del Amo! She recently published her book How to Thrive By Building Resilience: A Guide for You and Your Child. This book aims to create a space for reflection and the deliberate cultivation of resilience.

Belen also co-founded a resilience advisory firm to help executives, teams, and organizations build resilience. In 2018, she launched 3VERS to help parents and educators develop resilience in themselves and their children.

Click here to learn more about Belen and her new book. 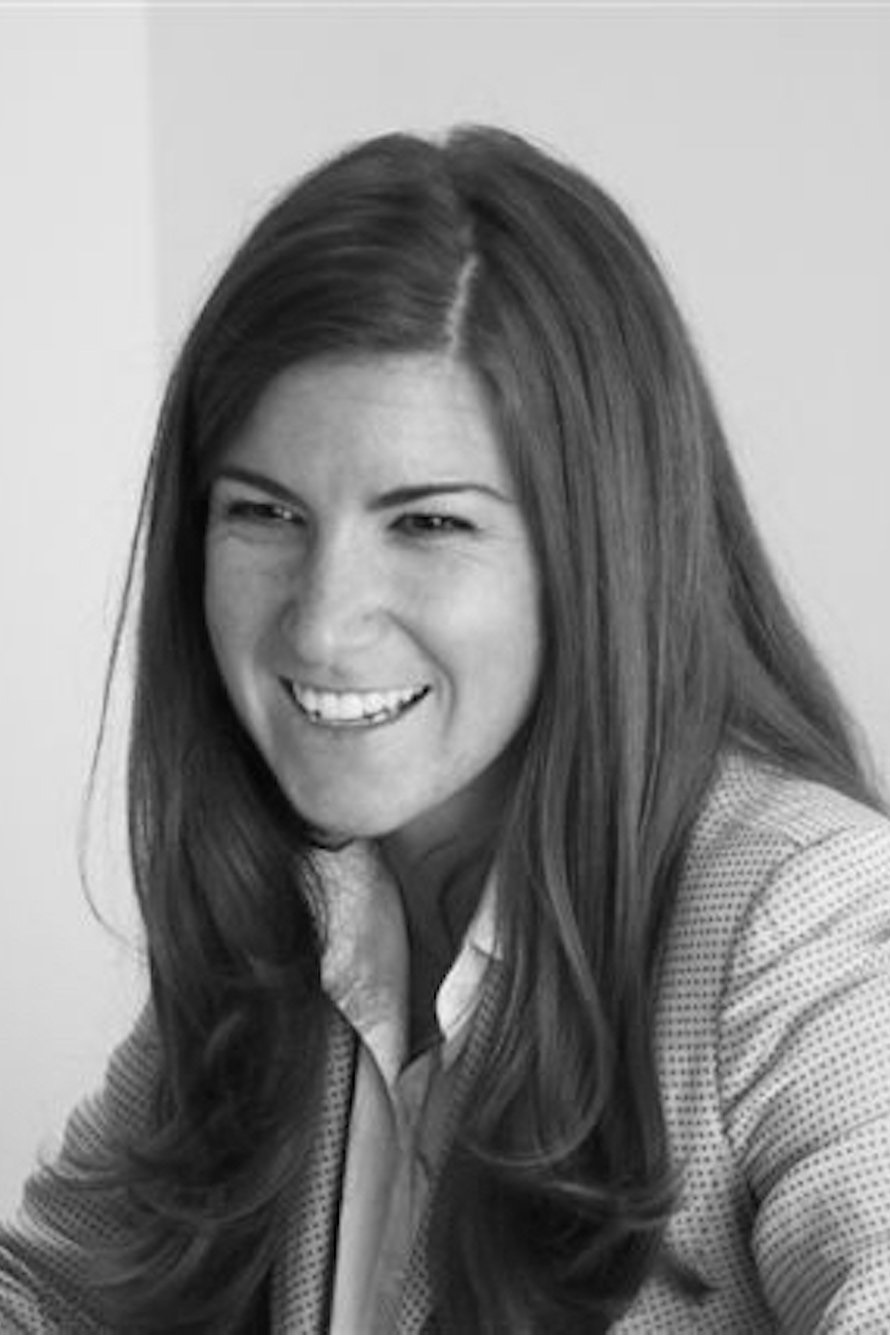 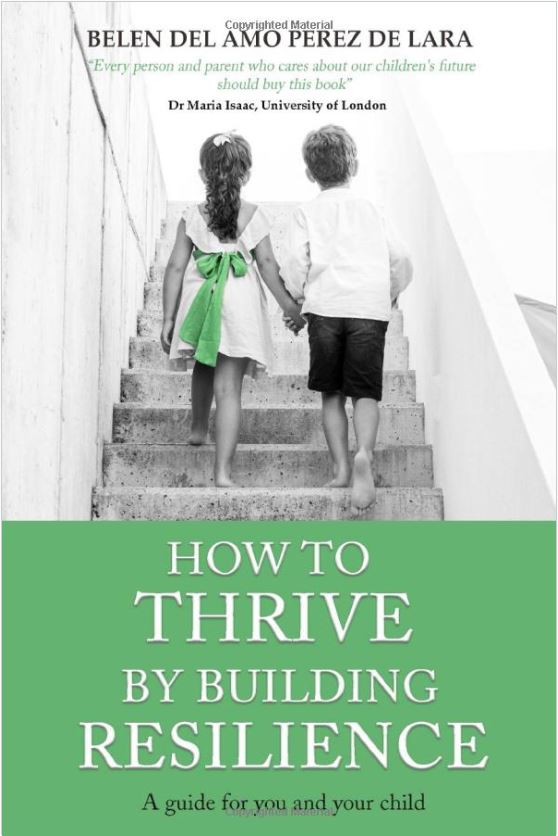 THE POWER OF MUSIC

Awty students are using their musical talents for something different this year: the Power of Music Club.

Founded by sophomore Vivian Wu, the Power of Music Club is a way for Awty Upper School musicians to come together to perform at different hospitals and retirement homes. The club started at the beginning of September and has been a success ever since. 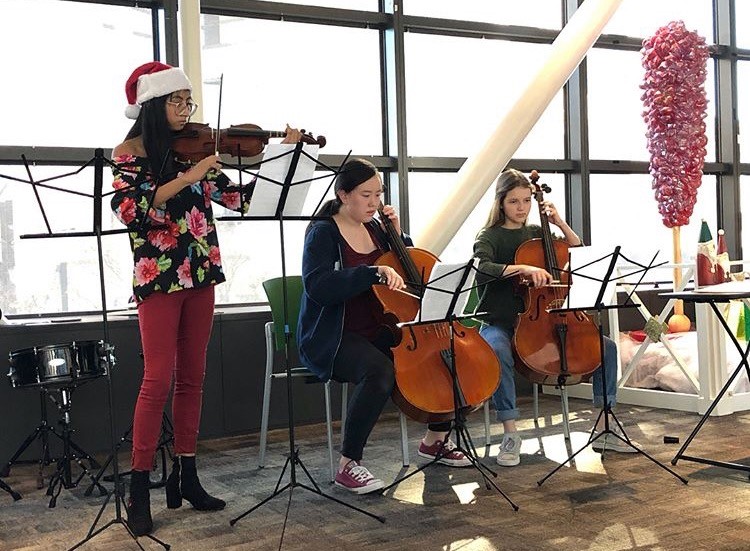 The Power of Music Club has performed at three hospitals since November including Brazos Towers Retirement Homes, Texas Children’s Hospital, and St. Dominic Village, a senior care community. Some of the songs they played included “La Vie en Rose”, “My Girl”, “Canon in D”, and “Love me Tender”. At Texas Children’s Hospital, the club played Christmas-themed songs such as “Jingle Bells”, “Grandma Got Run Over by a Reindeer”, and “Rudolph the Reindeer” to which some excited kids in the audience sang along.

Many students in the club agree performing for different audiences has helped them to improve their own skills.

“We are developing our musical skills as well as our social skills,” stated junior Meera Vashisht.

“It’s so cool to see people enjoying our music,” added junior Dalya Mawlawi. “It shows what music is all about: bringing joy to people.”

President and founder Vivian Wu says she first came up with idea of the club when she was practicing the cello. She described becoming quickly frustrated when she wasn’t able to hit the right notes on the fretboard.

“I decided to take a break. Instead of getting a snack or going on my phone I just printed a bunch of sheet music of pop songs from online and started to play them for fun,” says Wu.

After doing this, she remembered how enjoyable it was to play music simply for fun and without stress. This gave her the idea to create a club that would combine playing fun music with a noble cause. By performing at hospitals and senior homes, students could perform easy and fun songs while spreading joy to others.

Wu plans to continue the club throughout her Upper School years at Awty until she can pass on the role of president to someone in a younger class.