bringing innovation into the classroom

At Awty, we know our students need the cutting-edge 21st century skills that will allow them to adapt and transform in this ever-changing world — the skills that both colleges and employers are seeking. Using innovation and technology inside the classroom, we help our students hone their ability to solve problems, think critically, work collaboratively, and lead confidently. Below we feature a number of ways we are making this learning come to life this year.

New Furniture:
This school year, several classrooms in the Levant Foundation Building have been furnished with new student desks and chairs, making it easier for students to learn and work together in both small and large groups. The Interchange Diamond Desks by Smith System are perfect for our students in cooperative learning settings since they can be used individually or in groupings of up to six. Smith System's In2it Mobile Chairs make it easy for both our students and teachers to transition from one task to the next in a collaborative environment.

Hydroponics and Aquaponics:
As mentioned in the last issue of Accent, Awty has partnered with Green Mountain Energy Sun Club to create a unique sustainability project converting two 20' shipping containers into fully functional growing facilities/laboratories, one for hydroponics and one for aquaponics.

Since the arrival of the two containers, our students have been involved from the very beginning including planning, designing, flow modeling, installation, testing, modifications, experimenting, and overall use. Essentially, these two containers have been turned into learning centers giving our students hands-on, real world experience. It has given our students an environment where they have to think on their feet, design on the fly, and learn hands-on skills like plumbing and using various tools such as saws and drills. They have also learned to deal with failure as well as the iterative nature of the design process, repeating steps as many times as needed, making improvements along the way, and discovering new possibilities and solutions.

The hydroponics container is a ready-made, state-of-the-art hydroponics laboratory. The environmental controls ensure optimal light, temperature, and nutrients maximize plant growth. The first crops are currently growing and should be ready for harvest within a few weeks. Any vegetables harvested will serve as locally sourced ingredients for Sage Dining on campus.

The aquaponics container, designed and constructed by the students, will essentially be a fish farm once it is ready for use. Any fish harvested will also be used as ingredients by Sage Dining.

MathArt Competition:
In December, we saw STEAM education in action! The Math Club sponsored MathArt, a competition and community art project where math had to be an integral part of the final artistic piece. The contest brought both strong math and art students together to work collaboratively in teams. The top three winners included:

Technology in the Classroom:
At Awty, we integrate technology to enhance the process of teaching and learning. Students in 3rd grade/CE2, under Mr. Houssard’s guidance, learn to code with the computer program Scratch Junior so they can animate their original stories. In the process, students become designers, problem solvers, and express their creativity. 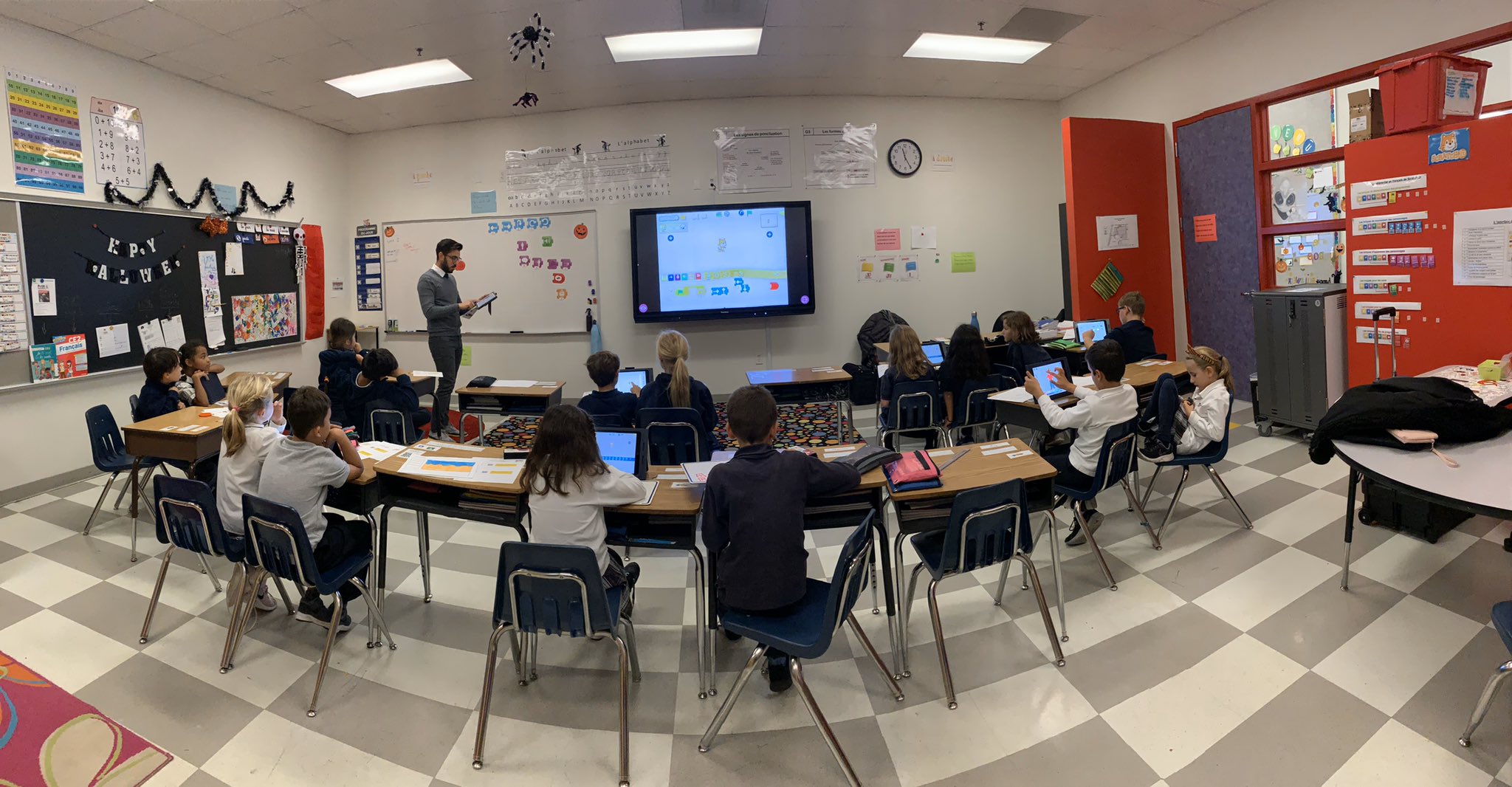 We have created learning environments where students choose how to show their learning. They become engaged in multimedia projects. Below, a student in 1st grade L2 Spanish uses the program Seesaw to record her voice after uploading a picture of her comic strip in Spanish. The class studied Quino, the Argentinian creator of Mafalda. 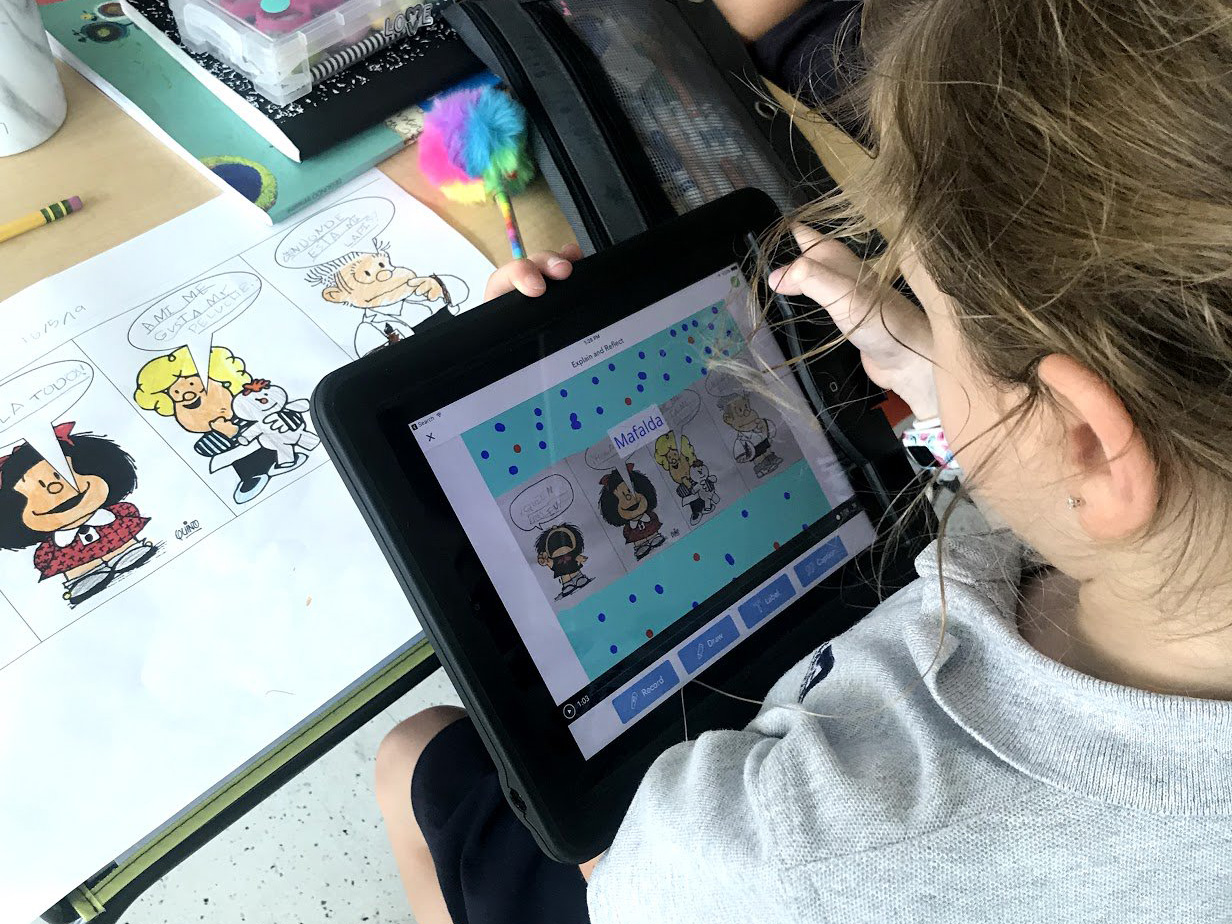 We are preparing students to adapt to emerging technologies and to solve problems by choosing the best tool. In 8th grade, students in Ms. Frommert’s class create cost optimization problems with the tech tool AlgebraDesmos.

the year of the rat

This year’s main activity was a riddle contest where dozens of riddles were hung from paper lanterns around the PAAC. Each student attending the celebration got the chance to solve a riddle and receive a special prize.

The event ended with a traditional lion dance featuring not one, but four lions.

This year, the chairs for two wonderful events sponsored by Awty Parents and Personnel Association (APPA), Celebrating Awty and The International Festival, teamed up to bring a fun evening to Awty parents and staff on January 31.

The event not only celebrated the Awty community’s international spirit, but it also celebrated Japan, the country of honor for Awty’s 2020 International Festival slated for April 16-17. The Café was completely transformed into a delicate Japanese space. As guests arrived, they admired giant white origami butterflies hanging from the ceiling, small colorful origami butterflies on the tables made by some of the Lower School students, as well as a display with origami creations by Andy Dequin, 1ère and President of Awty’s US Origami Club. During the evening, guests learned about Kendama, a traditional Japanese skill toy, from Kendama teacher Michael Martin and Head of Early Learning Stanley Way, who dropped by with a box of kendamas to be used by ELC students later in the year. Attendees also had the chance to take pictures at a photo booth framed by a wooden Torii gate, which was made especially for this event by Awty parents Ruby and Pankaj Wadhwa. The Japanese theme didn’t end there. Partygoers also enjoyed delicious sushi catered by Sushic LLC and Japanese pastry by Srikandi LLC, while sipping on wine, sake, and plum wine.

The evening began with a song performed by Japanese Awty mom and professional singer Ari Muto. Her performance was followed by remarks from APPA President Glenna Sharafeldin, Head of School Lisa Darling, and Consul-General of Japan Hideo Fukushima, who attended the event accompanied by his wife, Mrs. Kaori Fukushima.

Without a doubt, the highlight of the night was the karaoke station. Consul-General Fukushima kicked off the karaoke performances with a Beatles song. He was followed by Awty parents, faculty, and staff who, for the next two hours, were simply unstoppable, singing songs in English, French, and Spanish. Every genre of music including songs by Edith Piaf, ABBA, Queen, Shakira, Carlos Vives, and Lizzo could be heard throughout the night. The crowd would have probably stayed until midnight if Celebrating Awty Co-chairs Zenia Quintana and Abigail Ciscomani had not signaled the end. Overall, the evening finished with an undisputable consensus: it was a great party and Awty needs more karaoke nights!

Heartfelt thanks to both the Celebrating Awty and International Festival committees, especially event chairs Zenia Quintana, Abigail Ciscomani, Ana-Maria Nicolae, Ana Camilla Murillo, Elene Stubbe, and Inta Bozkurt for a spectacular night. A giant round of applause to The Japan America Association of Houston (JASH), Asia Society, the Mochizuki Cultural Center, MUFG Bank, Ltd., Sushic LLC, and The Japanese Association of Greater Houston. Without their help, Celebrating Awty and the International Festival would not be possible. A warm thank you to Rie Kojima Angeli, the chair of the Japan booth, and all of Awty’s Japanese families who have made the events leading up to the International Festival, including Celebrating Awty, so special. Domo arigato!

Squeals of excitement filled the air as Santa made his way onto the Early Learning Campus just before the holiday break. Jolly ol' Saint Nick made a grand entrance on top of a fire truck from Houston Fire Department Station No. 38, bringing some holiday cheer to Awty’s youngest students. He and the fire fighters visited with the children and collected the toys that had been donated through Awty’s Annual Toy Drive.

Santa surprised our students at the ELC ! They were so excited @awtyintlschool pic.twitter.com/CDMUX8GwaH

Prior to the holiday break, Awty held its annual Tree Lighting Ceremony on December 13. Keeping with tradition, students who have been at Awty the longest and the student who has attended Awty the shortest amount of time were honored with lighting Awty’s Christmas tree during the event.

This year, the honor went to 16 students, the largest number of students since the tradition began. Fifteen seniors including Yassmine Abba-Kaka, Serine Elbakly, Isabella Evans, Ginevra Fenoglio, Mirren Hendry, Tristan Houy, Alonso Palafox, Emilio Palafox, Isabelle Pham, Deanna Rassoli, Chloé Ruzzo, Eddy Salomon Simon, Ieuan Smithard, Thibault Tonnel, and Chelsey West began attending Awty as preschoolers in 2005 and have all been at Awty the longest. PS student Liva Riddle had the honor of being the youngest student and the student who has attended Awty the shortest amount of time. These students were joined by Sam Waugh (the employee who has worked at Awty the longest), John Kalmus (the employee who has been at Awty the shortest amount of time), Head of School Lisa Darling, Proviseur and Deputy Head of School Pierre Puget, and Santa Claus in lighting the tree.

The People of Color Conference (PoCC) is the flagship of the National Association of Independent Schools' commitment to equity and justice in teaching, learning, and organizational development. The mission of the conference is to provide a safe space for leadership and professional development and networking for people of color and allies of all backgrounds in independent schools. PoCC equips educators at every level, from teachers to trustees, with knowledge, skills, and experiences to improve and enhance the interracial, interethnic, and intercultural climate in their schools, as well as the academic, social-emotional, and workplace performance outcomes for students and adults alike.

The Student Diversity Leadership Conference (SDLC) is a multiracial, multicultural gathering of high school student leaders (9th-12th grades) from across the U.S. and abroad. SDLC focuses on self-reflecting, forming allies, and building community. Led by a diverse team of trained adult and peer facilitators, participating students develop cross-cultural communication skills, design effective strategies for social justice practice through dialogue and the arts, and learn the foundations of allyship and networking principles. In addition to large group sessions, SDLC "family groups" and "home groups" allow for dialogue and sharing in smaller units.

The conference includes pre-conference seminars, general sessions with keynotes, dozens of practitioner-led workshops, extensive affinity group work, and dialogue sessions. Attendance is limited to 1,600 students and each school may send up to six students. For the 2020 conference, a delegation of six students from Awty will be chosen next month.

In late November, Awty was fortunate to have a special complimentary performance by Franco-Belgian cellist Camille Thomas! She is the first cellist in over 40 years to be signed by Deutsche Grammophon. Thanks to a special partnership with the Society of Performing Arts, Camille was able to do a private mini-performance (on a Stradivarius cello from 1730, no less), an artist talk about her journey as a musician, and a question and answer session.

YOU CAN HELP PROMOTE AWTY!

As members of the Awty community, we want you to be our cheerleaders. You can help promote Awty by following these quick, easy steps: